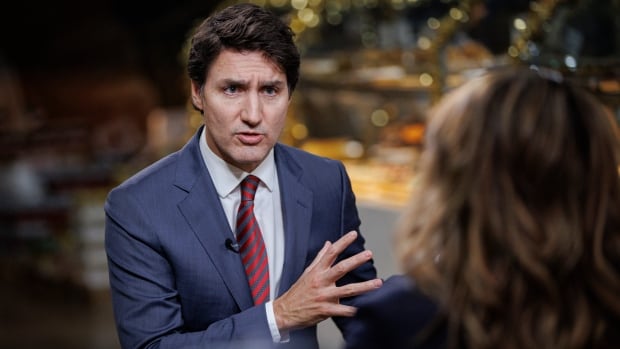 Prime Minister Justin Trudeau is dismissing what he calls the “simplistic” idea of slapping a windfall tax on the grocery and energy sectors, adding such a move likely would do more harm than good.

“The last thing we want to do is put on a tax that people then just pass along to the consumers,” Trudeau said in a year-end interview with CBC News Chief Political Correspondent Rosemary Barton.

Statistics Canada reports that the annual food inflation rate hit 11.4 per cent last month, up from 11 per cent in October. Gasoline prices declined by 3.6 per cent but are still up 13.7 per cent compared to where they were a year ago.

Canada’s inflation rate cooled to 6.8 per cent last month as prices for gasoline and furniture went down, but the cost of food and rent went up. The rate was 6.9 per cent in October.

The NDP has been calling on the federal government to impose a windfall tax on the oil and gas sectors and on grocery store chains — businesses party leader Jagmeet Singh has accused of engaging in “greedflation.”

The Liberal government already has imposed such a tax on big banks and insurers. These sectors have been hit with a one-time 15 per cent tax on profits over $1 billion for the 2021 tax year. The tax is expected to raise about $4 billion.

In a year-end interview with Chief Political Correspondent Rosemary Barton, Prime Minister Justin Trudeau talks about the health-care crisis, the threat of economic uncertainty, and the anger some feel toward his government and policies.

Trudeau said his government will continue to look for ways to help the most vulnerable, but hitting the energy and grocery sectors with a new tax won’t be one of them.

“I don’t think that the simplistic solution, as satisfying as it might sound, is necessarily the right approach here,” Trudeau said.

Backing the Bank of Canada

Trudeau said his government is pressuring the oil and gas sector to invest some of its windfall profits into decarbonization efforts, in the hopes of creating long-term jobs in the sector.

The bank has taken its rate from functionally zero to its highest point since 2008 — its fastest pace of rate hikes since inflation targeting began in the 1990s. Those rate hikes have contributed to a rise in mortgage rates and the cost of servicing other loans.

“In Canada we have strong institutions and the Bank of Canada acts independently in a way that it thinks is best for Canadians. And we respect that,” Trudeau said.

Trudeau said that as interest rates rise, his government is doing what it can to help ease the pain by trying to strengthen supply chains, rolling out cheaper child-care, providing GST rebates and rental supports and offering dental care to low-income Canadians.

“These are things that are going to help Canadians get through this difficult time, the ones who need it, while at the same time not adding to the inflationary pressures in our economy,” he said.

travel, vacation & foodie
We use cookies on our website to give you the most relevant experience by remembering your preferences and repeat visits. By clicking “Accept All”, you consent to the use of ALL the cookies. However, you may visit "Cookie Settings" to provide a controlled consent.
Cookie SettingsAccept All
Manage consent